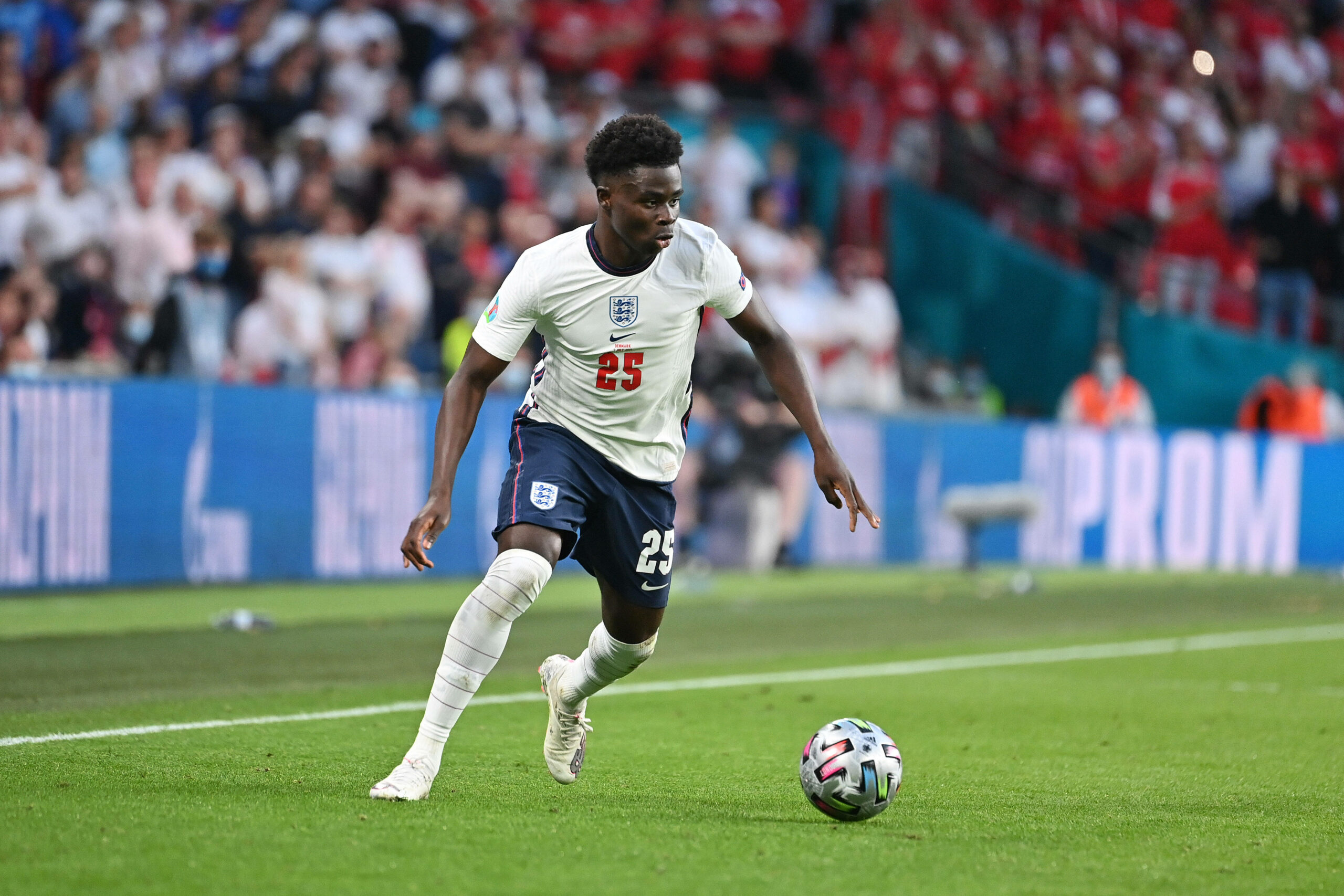 Bukayo Saka is Arsenal’s perfect ambassador on the global stage, but his Euro 2020 success is a warning for the club.

England’s remarkable run to the final of Euro 2020 has gripped the nation in recent weeks, and there has been a surprise name at the center of the team’s historic run: Bukayo Saka. The 19-year-old became the youngest player to represent England in a semi-final of a major tournament against Denmark this week, and he delivered the cross that led to the equalising goal.

Before the tournament started, many were focused on fellow attackers Jack Grealish, Jadon Sancho, Marcus Rashford, and Phil Foden, but it is the Arsenal academy product that has emerged Southgate’s ideal man to partner captain Harry Kane and Raheem Sterling in England’s front line. His performances to date have more than justified his inclusion, with Saka playing a crucial role in the team’s winning goal against the Czech Republic in the final group game before impressing once more against Germany in the round of 16.

In addition to his stellar performances, Saka’s persona has made him an instant favourite amongst fellow players and fans. The teenager is modest off-the-pitch while remarkably brave on-the-ball, capturing the hearts of fans and emerging as the nation’s golden boy.

For Arsenal, having a player operating under such a spotlight is an immeasurable positive. Particularly at a time when the club’s image and reach across the world has undoubtedly suffered due to a dip in results and missing out on elite European competition, having a player garner so much positive attention reflects positively on the club. Casual fans of the sport who tune in when international tournaments come around will be drawn towards Arsenal through Saka, just like generations before were drawn to the club through Bergkamp, Henry, or even Ozil shining for their respective nations. Bukayo Saka, through both his footballing ability and admirable character, is Arsenal’s perfect ambassador on the global stage.

His international success is also a great advertisement for Arsenal’s Hale End academy. Fellow recent graduates Emile Smith-Rowe, Joe Willock, Ainsley Maitland-Niles, and Reiss Nelson have all experienced a measure of success at club level, and Saka’s prosperous rise will only help the academy’s already distinguished reputation. At a time when there is no shortage of clubs promising players paths to first-team football, youngsters will look at Saka as an example of what Arsenal can do for them.

On the football side, Arsenal have a player who is constantly improving and who will have learned a lot from representing his country on the biggest stage and under intense pressure. At just 19, Saka will return to Arsenal having played in games with huge stakes, including a European Championship final. The experience of these games will benefit his development and performances for Arsenal in the long-term, and even being involved with the England squad regularly will have allowed him to learn from other talented players and experienced figureheads.

Bukayo Saka signed a new four-year-contract with Arsenal at the end of the 2019-2020 season, ending any doubts over his immediate-term future. However, a player who is now mixing with the very best in the world both in training and on the pitch, playing in the highest-profile matches in the world and against elite opposition, should be playing Champions League football.

Arsenal certainly have the ambition of rediscovering the competition sooner rather than later, and will hope that this summer’s rebuild will take them closer to that goal, but Bukayo Saka cannot be operating without elite European football for too much longer, even if he is still only 19. If Arsenal, who have finished 8th in the league in consecutive seasons, continue to stagnate in the upcoming season and fail to impress, questions will be asked of their ability to hold on to someone whose talent is unquestionably elite and whose ambition will rightfully be sky high.

Bukayo Saka is a boyhood Arsenal fan who will likely be reluctant to leave the club he grew up in, but Arsenal’s sporting reality will need to improve quickly to justify keeping hold of one of the Europe’s top teenagers for years to come. Saka’s star turn in Euro 2020 highlights Arsenal’s imperative to get their act together quickly, and for their rebuild to deliver immediate improvement.