Barcelona were really not that good… 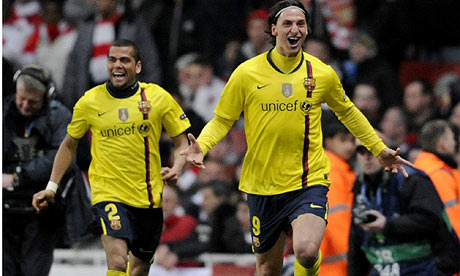 I’m sorry, what is with the media love affair with Barcelona? Is it me, or were they really not that good?

Sure, the score could have been a cricket score, but it wasn’t. What does that tell you about Barcelona’s ability? That we are better defenders, have a good goalkeeper and they are inefficient finishers – aka wasters! In fact, had we had an even better goalie, it would be us with the win.

I love how when a team like United pulls off something akin to what we did, it is “the stuff of champions”, but when we do it, “Barcelona gave us a lesson in football.”

I love it how when we play pretty football with no end product, it immediately brings back a negative Arsenal stereotype – when it fact that has not been our problem for a couple of seasons now! This argument has been used against us for years, and now I will use it. Football is more than a pretty passing game, where it matters Barcelona were good enough.

In fact, you can look it at this way; we were as good as Barcelona where it mattered. Or lets look at it this way; Barcelona came away from us with nothing more than Birmingham City did.

So, Arsenal took advantage of them in the last thirty minutes or so, when they were “physically drained” from their “onslaught” at our goal. So? We had to suffer and defend the same onslaught. We weren’t complaining. In fact, we had to make two subs in the first half. What does that tell you? That we are physically superior to Barcelona. We are the fitter team.

So Barcelona will steamroller us in the second leg, will they? Funny, I thought it was us who walked away with the mental advantage, because by the end, it was us who were the team on top. All we were guilty of, was showing Barcelona too much respect. When we had nothing to lose, we went for it. And boy did we go for it.  We were equal to, in fact better than them. They will have gone home, down, wondering how we managed to better them.

Chin up gooners. Up the Arsenal.