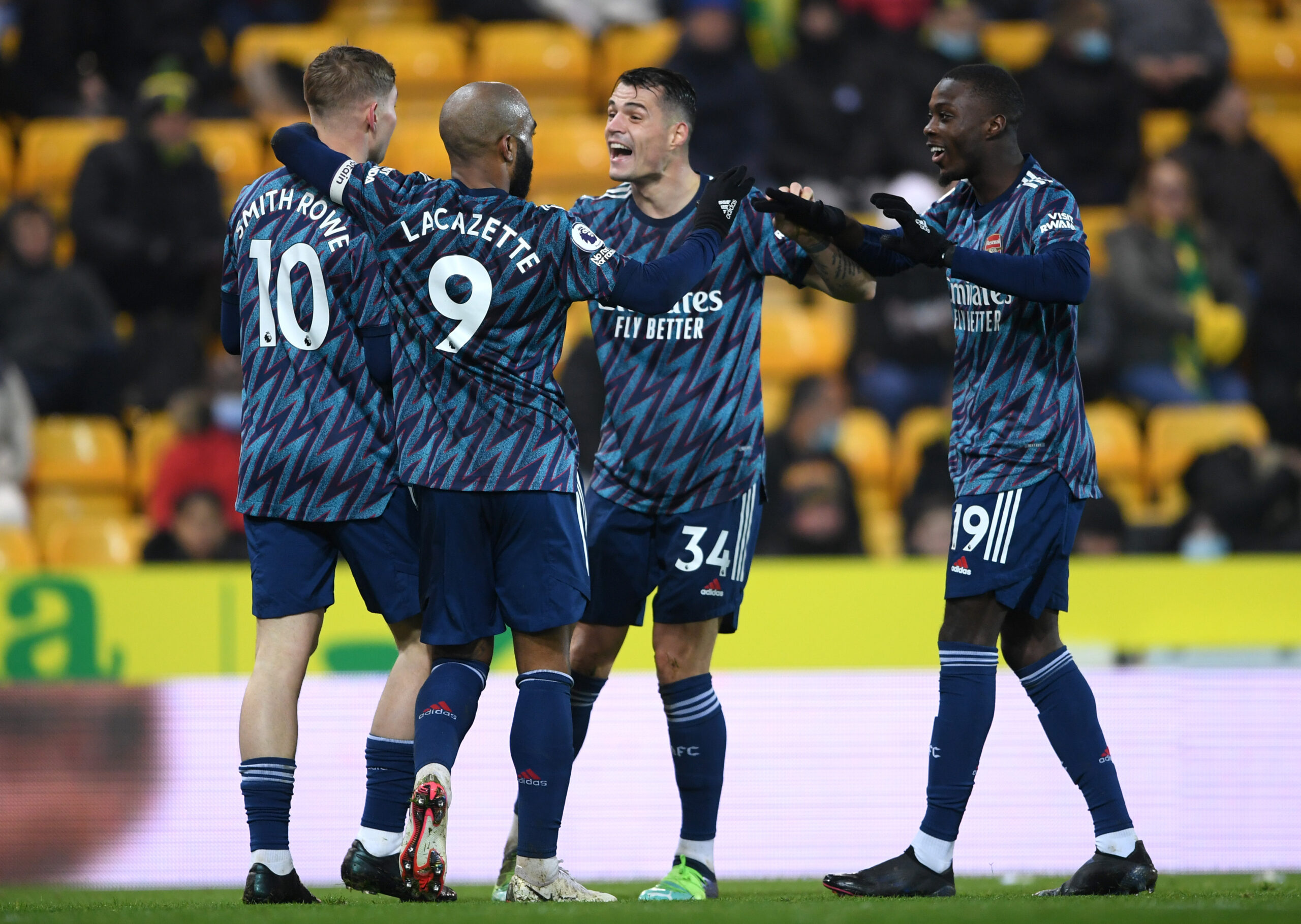 Arsenal finished off 2021 proceedings on a run of five consecutive wins in all competitions, sending a clear message that they mean business this term.

Now it is time to take a look at the Gunners’ packed January schedule.

Arsenal start the new calendar year with a mouth-watering clash against high-flying Manchester City at the Emirates Stadium.

Mikel Arteta’s side closed out 2021 on a high, racking up an eye-catching four-game winning run to solidify their position in fourth in the Premier League table.

Arsenal’s recent purple patch comes at the best possible moment as they go up against the league-leaders Man City, who have won their last ten top-flight matches in a row.

Vengeance could be on the cards, as the Gunners seek revenge for a humiliating 5-0 defeat in the reverse fixture at the Etihad back in August.

The early 2022 schedule has not been kind to Arsenal as only five days after their mammoth Premier League meeting with Man City, they face Liverpool in the first leg of their Carabao Cup semi-final tie.

Without the distraction of European football and given the improbability of fighting their way back into the Premier League title race, this could be the Gunners’ only chance to land any piece of silverware this term.

Standing in Arsenal’s way will be a Liverpool side the Londoners have failed to score against across their last three competitive H2Hs, including a 4-0 in their Premier League encounter at Anfield in November.

However, there is no doubt Arteta’s men will fancy their chances against bitter rivals in front of attending Emirates fans.

Unlike their Carabao Cup tie against Liverpool, Arsenal will be odds-on favourites to overcome Nottingham Forest in the third round of the FA Cup.

Nottingham’s recent form in the Championship (W3, L1) may fill them with confidence ahead of their first competitive meeting with the Gunners since September 2019.

Encouraged by the home support at the City Ground, the ‘Tricky Trees’ will pursue vendetta following an embarrassing 5-0 loss in their 2019 Carabao Cup match against Arsenal two-and-a-half years ago.

Arsenal will head to Anfield to meet Liverpool in the return leg of their Carabao Cup semi-final tie on January 13.

Recent trips to Anfield have proved rather unpleasant for the North London outfit, as they have failed to win any of their last 11 competitive fixtures there within 90 minutes of play (D4, L11).

The Gunners cruised to a landslide 3-1 victory in the reverse fixture back in September but much has changed in the Spurs camp since the Emirates fiasco.

Tottenham’s noticeable upturn in form under the Italian manager has got them back in contention for a top-four finish ahead of this pivotal clash.

Despite the Clarets’ underwhelming domestic campaign so far, the Gunners’ triumph here is all but a foregone conclusion, at least based on the recent H2H stakes.

Before pulling off a narrow 1-0 win earlier this season, the Londoners were winless in their previous three top-flight meetings with Burnley on the spin (D2, L1).

Arsenal Transfer Targets For January 2022
Pierre-Emerick Aubameyang OUT, Dusan Vlahovic IN – How Could Arsenal’s January Transfer Campaign Play Out?