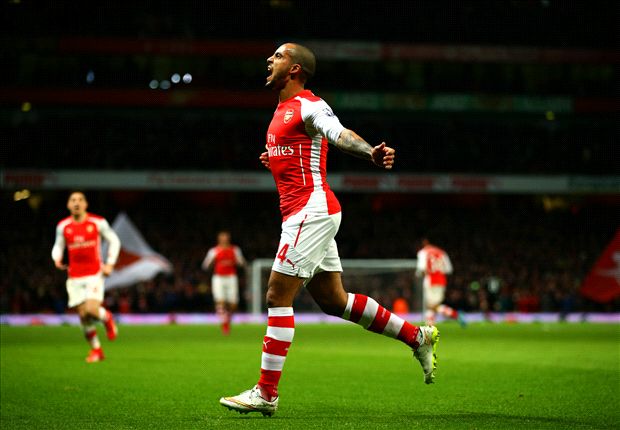 Following a more than disappointing loss away at Tottenham on Saturday it was of paramount importance that Arsenal bounced back with three points to resurrect their top four pursuit. Arsene Wenger’s men didn’t have it all their own way and ran out 2-1 winners in a very cagey performance, but what did we learn?

The importance of Mesut Ozil

The German attacking midfielder has been almost faultless since his return from injury and once more he was heavily involved, he had a part to play in both goals as Arsenal capitalised on Leicester City’s mistakes. Ozil provided the corner from which Laurent Koscielny converted from close range and also played a big part in Theo Walcott’s goal which put Arsenal 2-0 before the break. The former Real Madrid play maker was also unfortunate not to add to his own goal tally as he failed to beat Mark Schwarzer after a fine individual effort in the first half.

Alexis Sanchez Is No Olivier Giroud

The Chilean attacker has been a revelation since his arrival from FC Barcelona in the Summer and has drawn parallels to Luis Suarez’s performances at Liverpool in his final season in the Premier League. Sanchez’s best performances in an Arsenal shirt have been in the wide areas and more often than not playing on the left of an attacking front 3 where he has created havoc for opposition defences. It was noticeable that Sanchez is not the most comfortable playing with his back to goal and he found himself dropping deeper which resulted in Arsenal playing in affect a 4-6-0 system which gave them no physicality in the final third.

Arsene Wenger made 3 changes from the White Hart lane defeat with Tomas Rosicky, Theo Walcott and Alexis Sanchez replacing Danny Welbeck, Aaron Ramsey and Olivier Giroud. On paper there would not normally be any complaints but the balance of the starting XI seemed all wrong from the first whistle and this resulted in a very unsettling performance. There was a distinct lack of urgency, it is unclear whether this was down to the changes or the attitude but the performance was void of application. Francis Coquelin did not have his most productive game and was left isolated on many an occasion. Credit must be leveled at how Leicester manager Nigel Pearson set his team up, he definitely wanted his players to give it a go and for big periods they controlled the game more than most have done at the Emirates this season.

Can Santi Cazorla and Mesut Ozil Play Together?

It is a debate that raged on within the England camp for years over Frank Lampard and Steven Gerrard and now it would make sense to debate the same between Cazorla and Ozil. Both are very influential players when played in their favoured No.10 roles but it does beg the question as to whether Arsenal really lack penetration when both are on the field? In Ozil’s absence Cazorla has been sensational picking up Arsenal’s player of the month for two months in succession and ran that game impressively at the Etihad against Manchester City in a 2-0 victory. Since then Ozil has come back in the fold and has been deployed wide left in a 4-3-3 system which he has played well in but both players have a tendency to take similar positions which has seen the attack become disjointed. Ozil has become impossible to drop since his return scoring 3 goals in 3 games before the 2-1 victory over Leicester and it has been proven that Arsenal perform better with him in the team. It would draw the conclusion that for Arsenal to get the maximum out of Ozil it may be necessary to drop Cazorla to the bench.

Theo Walcott Fitness Could Be Massive

It would be difficult to deny that Walcott’s return has not been a timely boost for the Gunners, after being out for a full year the pacey winger has been a monumental absence for Arsene Wenger who look a lot more dangerous with him starting. Walcott has scored 3 goals in the 3 starts he has managed since his return and it is difficult to argue anything to the contrary. His return has been timely with the injury to Alex Oxlade-Chamberlain who many see as Walcott’s understudy in the right wing department, “Ox” has shown glimpses of real quality this season filling in for his former Southampton team-mate and will surely put pressure on him when he returns in the next few weeks.

Arsenal Training Photos
Should Wilshere leave, would we miss him?