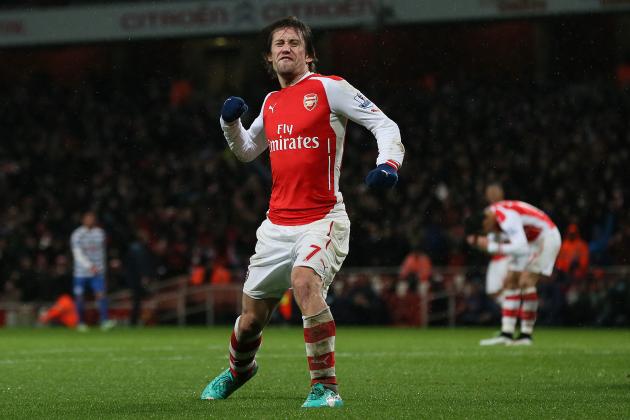 Rosicky who is affectionately known as “Mozart” due to his passing artistry has been frustrated this season with limited first team opportunities and many expected the Czech international to leave due to dropping down the pecking order this season.

The playmaker has struggled to hold down a first team place and has now dropped behind Jack Wilshere, Aaron Ramsey, Mesut Ozil, Theo Walcott and Alexis Sanchez but with him agreeing to another year it shows that he is determined to fight for his place, something many fans will be ecstatic about.

Despite making only five starts this campaign he remains a very important member of Wenger’s squad.

Asked if he expected Rosicky to stay, Wenger replied: “Yes. We have taken up the option.”

There had been speculation that the reason for the extension was to be part of some deal to bring Chelsea’s Petr Cech to the Emirates with both Czech internationals being very good friends, this was denied by Wenger.

“Tomas Rosicky is not involved in the transfer market at all, he will be with us next season and we do not use the players for that,” the Arsenal boss said.

“Most of the time it is the players who want to join you who come in. Sometimes they might call each other, but we do not get the players to interfere with that.”

Arsenal have limped over the line this season and baring a complete collapse at home to West Brom on Sunday they will finish third and avoid the dreaded Champions league qualification rounds, many will hope to see Rosicky play a big part in the final day as Wenger is surely to wring the changes from the team that looked so jaded on Wednesday night.