Arsenal finished a lowly eighth on the Premier League table last season with just 56 points on the board. The club showed an improvement in their results after the appointment of manager Mikel Arteta in December, but their inability to string a winning run together meant that they ended up with their worst-ever points tally and position in 25 years.

The Premier League recently announced their schedule for the new campaign and it is certainly not pleasant for the Gunners. The north London giants begin their campaign with an away London derby at Fulham and they have a great record in the fixture, which they have won in the last five meetings with a 15-3 aggregate score.

Hence, they should be fancied to get over the line, but the match may not be straightforward as the Cottagers will be motivated to shine in their first game after their top-flight return. In the second matchday, the Gunners have another local derby against West Ham United, this time at the Emirates Stadium. With the quality in the squad, they should pick up maximum points from both these fixtures.

However, they thereafter face a tough test of their top-four credentials with Liverpool, Sheffield United, Manchester City, Leicester City and Manchester United to tackle over the next five fixtures. Four of those teams finished in the top five of the league standings last term and a string of poor results could shatter their Champions League ambitions by the end of October itself.

Out of those five games, they are scheduled to tackle Liverpool, Manchester City and Manchester United all away from home, which is quite a surprise. The Gunners have had a poor away record against the so-called big-six over the years and they have not picked up a league win against them since the 2-0 triumph at City in February 2015.

Judging by this, they are facing an uphill task in the opening stages of the Premier League campaign, but they could benefit from the fact that the stadiums could be either empty or partially filled amid the ongoing health concerns due to the coronavirus pandemic.

That did not help during the backend of the previous campaign where they suffered defeats to Manchester City and Tottenham Hotspur on the road, but they showed that they can outwit any opposition on their day with victories over the Cityzens and Chelsea in the semi-final and final of the FA Cup, played at the Wembley.

On top of this, they inflicted only the third defeat of the Premier League season for runaway champions Liverpool at the Emirates Stadium and it remains to be seen whether they can replicate the showing away from home in the forthcoming campaign.

Barring the five-game period between late September and October, the Gunners have a fairly good fixture list until the back-end of February. They have Manchester City, Tottenham Hotspur and Liverpool to face in space of six matches at the Emirates Stadium.

The away form has proved the Achilles heel for the Gunners in recent seasons. Arteta will definitely want to improve on that statistic next term as the club look to qualify for the Champions League for the first time in five seasons. For this, they will definitely need to break the hoodoo on the road to the elite teams. 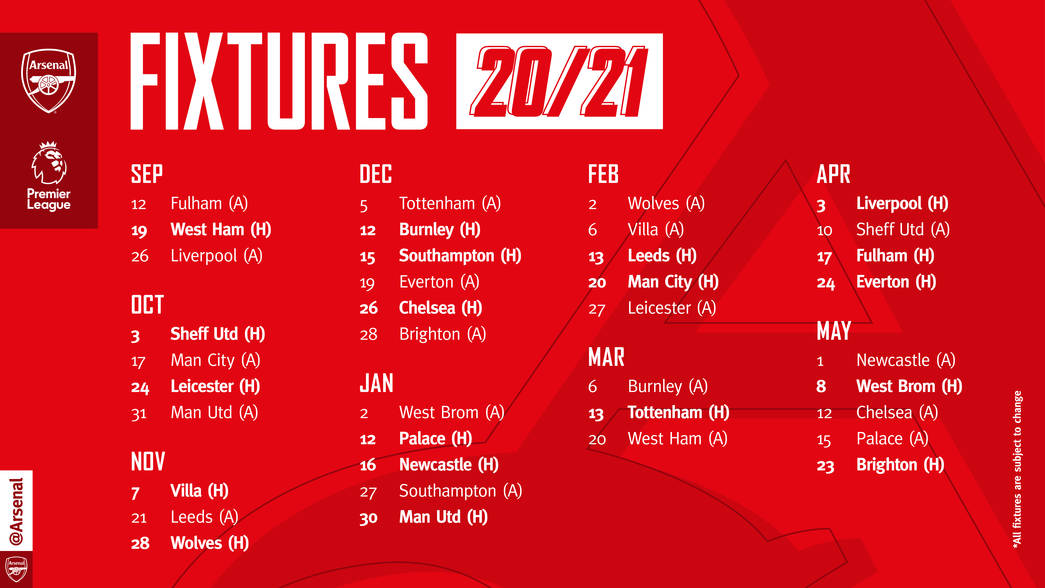