Arsenal need Usmanov to bring back the glory days 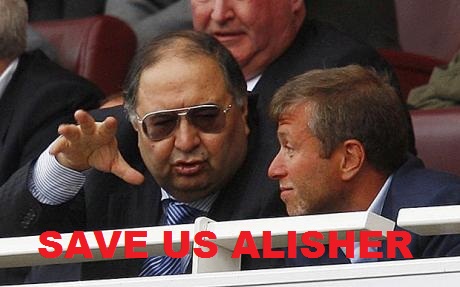 What have we seen over the last few week? Man City win the league and Chelsea win the Champions league. It proves that football has changed and teams now need to pump money into the club and sign the worlds best players in order to win titles.

But Arsenal have a man who wants to do this.. Uzbek billionaire and major Arsenal shareholder Alisher Usmanov wants to bring the best players to the club.

Usmanov who is not an Arsenal director even though he owns almost 30% of Arsenal Holdings, believes self-interest among the board members is stymieing the club’s chances of on-field success.

Usmanov also said that there would need to be a switch in emphasis if he is to end up on the board.
Usmanov said “If the role of a board member is to oversee a trophyless period while making significant personal profits and asking fans to pay inflation-busting ticket price increases then, no, I would not want to be on the board.

“If instead it is to try to deliver sustained success, to increase your personal investment in the club, to help develop the commercial position and to ensure the fans have a say in the running of the club then, yes, I think I certainly have something to contribute.

“In terms of doing things differently, let me give you a very clear example. Arsenal has all of its major commercial contracts coming up for renewal in the next couple of years. It’s no secret that to maximise the value of those you want to have success on the field and be winning trophies. To do that you need to invest now in building a winning team. This is simple commercial logic. Whether it comes to pass, we shall see.”

The sad fact is this. Arsenal will never win anything again without major investment. We need Alisher Usmanov to step forward and take control to bring back the glory days.

Since Stan Kroenke took over the club what have we seen? Any investment? Any major signings?. In fact we have seen our best players SOLD and the money NOT pumped back into signing replacements.

Another sad fact is that since 2005 and when Ashley Cole was apart of the FA CUP winning side, we have not won anything and Ashley has gone on to win EVERYTHING in football. Who can blame him, Clichy, Nasri, and so on for leaving in the hunt for glory.

We need change at Arsenal and we need Usmanov.

Have your say on this and more.. Join our Facebook page and have a join in the debate

Photo – Did Van Persie have dinner with a Man City delegate last night?
Video ; 7 years ago TODAY. Arsenal won something