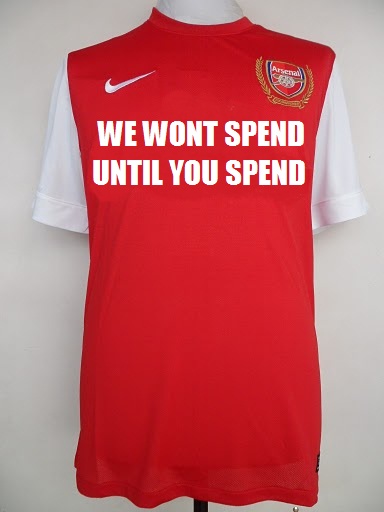 Rightly so the Arsenal fans booed the manager and the players off the pitch this weekend vs Blackburn. Do you blame them?

Finally it seems that the fans have had enough of all the lies and spin that Wenger and the board keep feeding us.

Thats why we need to have a voice and show the board and Wenger that we the fans want a change of policy at Arsenal, this has gone on long enough, Wenger’s project has failed.

Things need to change at Arsenal and fast. Thats why I say that we should boycott the new kit this summer as a sign of protest to the way the club is being run. Also boycott season ticket renewals, this will show the board they have to change and be more positive and not just go for top 4 every season.

When the transfer window shut at the end of Jan we were still fighting on all four fronts. Playing well?.. Not really, clearly to most fans we needed 1 or 2 players of really quality to push us on.

But no, same old stubborn Wenger allowed the window to shut without investing and with it our season as normal went downhill.

If we dont do anything then nothing will change. Wenger will say “no one expected us to compete for the title” and that we came close on all four fronts. He’s been dropping this into alot of interviews recently.

My view however is yet again most fans will be proven right in that we will win nothing.

The board, wenger and this team class top four as success, wenger has stated it on many occassions so nothing will change.

We will be told money is available, we will be linked with a few world class players and on the final day of the transfer window be told that the players wern’t available and wenger believes in the players he already has.

Everything about the Arsenal is groundhog day and has been for quite awhile. Thats why things must change.

Wenger needs to change his transfer policy, We need a change in tactics and backroom staff, and the players on mega wages need to be cleared out as they dont justify them.

This is not Arsene FC…Some Arsenal fans think that the club was founded in 1996 by a Frenchman called Arsene Wenger.

This club was massive before and will be after Arsene, and its time the board started to show some ambition rather then settle for 2nd 3rd of 4th best.

A word for Wenger &  the Arsenal Board… ” Enough is enough, We (the fans) wont spend until YOU spend”