Arsenal Fans ’Board’ of the same old story 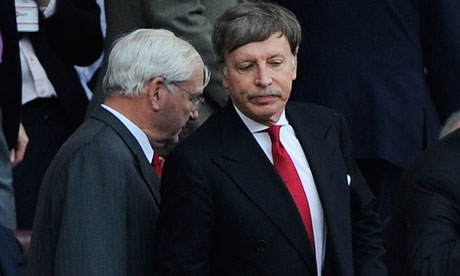 Fans everywhere are absolutely fuming about the Van Persie situation. Regardless of whether we thought he was staying or going we are all so annoyed that it has been allowed to happen again. When I look at all the great players we have let go over the years and all the (excuse the language) shit that we have brought in to replace them (Arteta excused) it makes me mad too. When did we lose sight of football and make this about money?

We have a Board at Arsenal that has a certain philosophy and I respect that, it’s always good to have a plan and ambition to aid a club to be well financed and stay within their means. But if you are sacrificing certain aspects of a football team to make money then something is going wrong. We shouldn’t be in this situation and something has to change. Gazidis spoke a lot about the Arsenal business model at the AST meeting and he spoke with passion about the fact that they plan for Arsenal to be a self sufficient club, but we as fans are getting frustrated with having to watch our team play badly and lose matches because we don’t have enough decent or experienced players.

· not competing to win trophies

· Not getting the right Sponsorship deals

The business model of Arsenal is too corporate; they are losing the sight of what it really means to be a Gunner. We have a board that are more content with lining their pockets than supporting a club and making it about football. Is Kroenke the reason for this?-Yes probably but I also think this it’s Gazidis and Peter Hill-Wood too. I miss David Dein, when he and Wenger combined their minds we ended up with the likes of Henry, Petit, Overmars and Vieira. Since Dein was forced out Hill-Wood has fallen apart and made some bad decisions. They need to realise the business model is not working and we are fed up. Time to re- think their strategy.

In this process, we’ve hamstrung our title chances and today if you went to a bookmarker like bwin.com and asked for Arsenal’s title odds you’d be laughed off. Since when did Arsenal automatically accept that they weren’t good enough to challenge for the title any more? Since when did Champions League qualification – an important financial milestone – become the main goal each season?

Usmanov has also entered into publicly declaring that he is unhappy with the situation at Arsenal and expresses deep reservations at their business model. He talks about Van Persie’s situation stating “Yet again we are faced with losing our true marquee player at the club because we cannot assure him of the future direction and give confidence that we can win trophies. Where are the safeguards to ensure that this doesn’t happen again and again in the future?” He also discusses other issues that they have regarding the current situation at AFC.

I’ve never been of the mind of throwing money at a club but in this modern day and with our team in this state then I think we could do with investment so we are competing for the league and Europe trophies. Otherwise we Arsenal fans are to then expect to be positioned lower in the league every year but paying premium prices and I can assure you that the fans will not tolerate this for long. We have someone like Usmanov who is WILLING to invest and keep the passion and winning alive but he is not even able to negotiate or even communicate with the board about taking over. I’m not saying that he is the best person but it’s someone different from what we have now and it could work for the better. Why can’t we as fans vote for who we want in charge?

As for Wenger I’m not really sure how I feel about him right now. In the last year I’ve been on the fence on my opinion about him; swaying between pro and against him. I admire his nurture the youth thinking but it’s not getting us anywhere when these youngsters get sold or loaned. I don’t know that Wenger is to blame for RVP leaving; I can imagine that he is the one that was begging him to stay. How much control does he really have if the board are pulling all the strings in regards to money? If he is of the same opinion as the board then he should join them and let a new manager come in because it is clear that it’s money and not football with him anymore. Do we just need a fresh view anyway in regards to the team?

We have the highest ticket prices in the Premiership and Arsenal are lucky that they have fans that love the team and game so much that they will pay these prices, but I think they might find that we are going to be less happy about this now we are losing one of our best players again. We’ve been in this situation a few times now and enough is enough.

I’m a Gooner through the good times, the bad times and the really bad times but I signed up to support Arsenal F.C not a corporation or business. I don’t mind either but don’t let our team and their football suffer. We want our club back. Is it time the fans got together and revolt and get our club back ourselves? We need to all state what we want and at least try. I don’t think there is a happy Gooner at the moment and I don’t think we will be happy unless something changes and soon. The club motto is “Victoria Concordia Crescit” but there just doesn’t seem to be much victory through harmony right now.

Article thanks to ” The Pitch is Back “

Could the signing of Afellay convince RVP to stay at Arsenal?
Kroenke, Gazidis & Wenger OUT! Save us Mr Usmanov