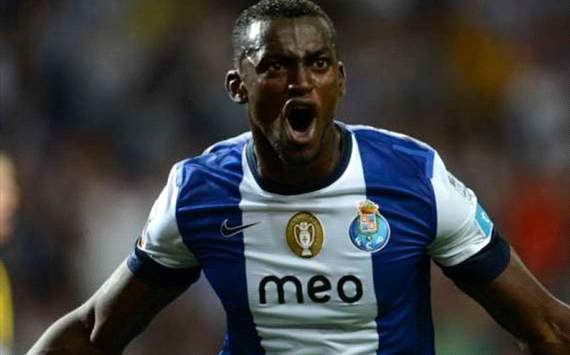 According to the Metro Arsene Wenger is interested in bringing Colombian Striker Jackson Martinez to the Emirates next season, The FC Porto Forward has already hinted at his desire to leave Portugal at the end of this season for a fresh challenge.

Martinez has scored an impressive 25 goals in 29 games already this season for Porto and is thought to be a target for Arsenal rivals Manchester United as they look to replace the inconsistent Radamel Falcao for next season.

Porto’s 28 year old has a £32 million release clause which many tip Arsenal to meet in the Summer as Wenger is believed to have highlighted the Colombian international as his marquee signing for next season.

Arsenal boss Wenger is clearly a fan of Martinez, this was his response when asked about the Colombian. “He could play in the Premier League, because he has the body to make a difference” Wenger went on to say “he uses in a very intelligent way his body, very short back lift and a good finisher”.

So what would this mean for Arsenal’s striking options?

It was painfully obvious that in Olivier Giroud’s absence Arsenal lack a real physical presence up front. Alexis Sanchez and Danny Welbeck have both been used occasionally in the Frenchman’s absence but have flattered to deceive through the middle and this is where Martinez would be different. He has a real physicality about him, uses his body very well and not to forget being comfortable with his back to goal. The Porto Striker has a bit of everything and is perfect for Premier League football.  The Colombian is also versatile and can play slightly deeper as well as on either flank which is yet another attribute that will surely endear him to Wenger as he likes his front 3 to interchange quickly as often during a game.

Martinez’s record at Porto is very impressive, in 122 appearances he has 85 goals and definitely has what it takes to be a success and Arsenal would be a perfect fit.

Brooklyn Beckham earns U18 call up
Another Arsenal Win Puts Them back In The Top 3, But It Was Far From Easy