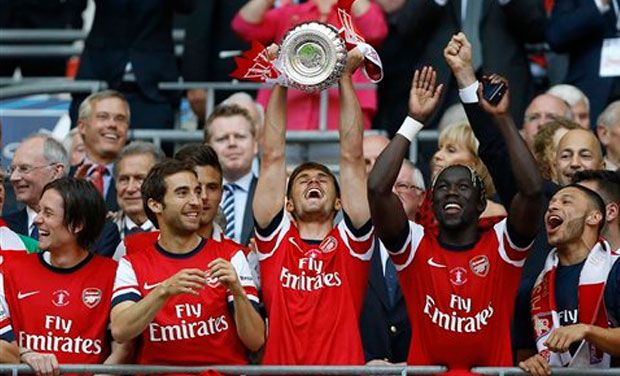 It all began with a loss in August to Aston Villa and every Arsenal fan in the land thought we were in for a repeat of the 12/13 season, messy football and frustrating results and even though there were a few testing times we have finished this season on a high and ended our 8 year trophy drought.

When we signed Mesut Özil on deadline day for £42mil breaking our transfer record by a long shot, it was a definitive moment of change for the club and his presence on the pitch was immediately felt and there was an air of excitement as we finally had a decent world class player join our team.

It was a big move by the club and it was only move as fans were demanding that the club spent some money and started to compete with others at the top of the league. It wasn’t the striker we ere all hoping for but it was just what we needed to boost form and moral and that is exactly what happened.

The arrival of Ozil improved everyone in the team, there was an instant turn around in results and games were definitely more enjoyable to watch. Seeing him build up a bond with Ramsey, Cazorla and Podolski has been great to watch.

Whatever happened to Ramsey last summer must have been immense because his improvement this season has been second to none, he has lifted Arsenal higher than any other player over the last few years and his ability has been laid bare for everyone to see. I have to admit I was one of the Ramsey critics last season, I wanted to keep him at the club but couldn’t see him improving much, I’m glad I was wrong.

He was arguably our best player throughout the year and when he got injured it’s no surprise that our form dipped too. He is one fully fit season away from becoming world class and after his leg break it is fully deserved, he has worked hard to get back to full ability…he may even be better.

Mertesacker and Koscielny deserve a mention in this review too, quite often the underrated pair don’t get the recognition they deserve for their performances but they were two of the best defenders in the League this year. They were solid for majority of their games, and asides from the big losses we had they managed to defend really well. Mertesacker was in great form this year, he has really improved and formed a strong partnership with Koscielny enabling them to learn a lot from each other.

In terms of progress there is the debate of whether we made any in the league this year? For the first time since Febuary 2010 we actually reached the top of the league and stayed there for 128 days this year. Even though this is a huge improvement on last season, it still doesn’t hide the fact that we finished fourth, quite ironically City spent the least days at the top of the league and won it. That’s a harder pill to  swallow knowing we were close at times but failing to have the conviction to keep us there until May.

We can’t cover over the fact that we still can’t win games against the top teams, and we still don’t have a plan b for when we go 3-0 down in a game. This was our year to gain an advantage on Man United and we failed to even beat them this season and it is victory in these games that are a necessity to win the league.

We have a real mental block with these games and it’s one of the biggest issues that Wenger will have to contend with in pre-season-that and buying a new striker, both of these failings are what cost us this year. We can all see that everyone has sussed out how we play so we need a change in tactics.

Winning the FA Cup was the best part of this season, it goes without saying that ending our trophy drought was the biggest relief for us, the team, Wenger and the board. The pressure was lifted and although the team didn’t play the greatest game of their lives they still had fight and that counts for something, they fought it out until the end and won that trophy and sometimes that is what it is about.

All in all it was a better 9 months for, we might have been frustrated at times and lost some games with big goal deficits but we come out of it stronger, aware of what needs to change and with a trophy in our cabinet and that’s not a bad way to look at it.

Hopefully we’ll see some good players arrive during the summer and bounce back to the top next season.