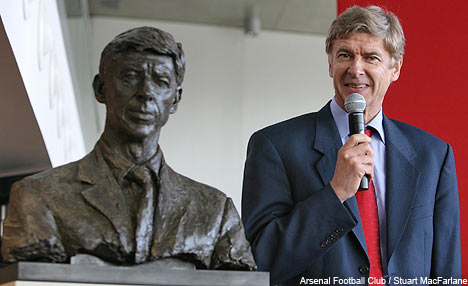 Bob Wilson will host the annual question and answer session with club shareholders on September 16 after it was postponed in May amid fears of a backlash following another trophyless season.

Manager Arsene Wenger was due to face a grilling from Arsenal fans and shareholders over his failure to sign a new goalkeeper, tactics and other issues

BUT, the Q&A with Wenger on the 16th will now be “censored” and Wenger will no longer be taking questions from shareholders and fans from the floor. The club have NOW demanded questions in advance.

From the News Of The World

ARSENAL have been accused of trying to censor Thursday’s shareholders’ question and answer session with manager Arsene Wenger.

The club have NOW demanded questions in advance.

An official email invitation sent to every shareholder asked for them to be submitted by 5pm LAST Thursday and said they would be restricted to one question each.

And angry fans slated a shocked Wenger over his transfer policy, tactics and strategy, while some claimed players didn’t care about the club.

One shareholder blasted: “Arsenal are trying to gag us. This is the one chance we get to speak openly and honestly with the manager.”

One fan said: “I have always trusted Arsene in the past. But because he has not brought in a new keeper this summer, I am losing my religion.”It is believed the club have acted in response to last year’s meeting when Wenger faced savage questions over transfer policy, selection and tactics and chairman Peter Hill-Wood branded some of them “disgraceful.”

I’m sure Wenger will now get a host of Questions on his favorite brand of Tea and the club with Censor ALL hard pressing questions from the fans like,

Why didn’t we sign a keeper? What takes us so long to sign a player? Why has Arsene been given a massive pay raise? Arsenal said we could now compete with anybody in the transfer market, so why are we still trying to balance the books? What is going on with the club and Stan Kroenke and Alisher Usmanov,Etc Etc…..