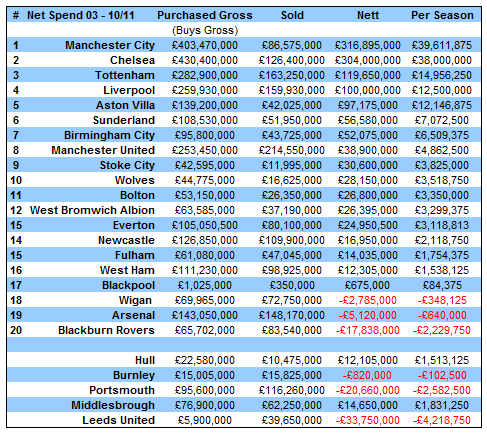 Just take a look at the table below, Arsenal are 2nd bottom when it comes to Money spent on players.

Is this something to be proud about?.. That the club has been able to fight at the top end of the table without spending big.

Now lets compare that to the other EPL teams. The table above represents the clubs net spend per season from Season 2003/04 to date.This Season saw the begining of very wealthy club ownership with Roman Abramovich’s purchase of Chelsea .
Purchases = Money spent on Players, Sold = Money received from Players sold.
Net = Purchased minus Sold , This gives an indication of new investment on players .

The per season column gives an average of the money spend per season since 1992. Data taken from [HERE]