Another New Year Upon Us, A Year That Will Yield Much Of The Same 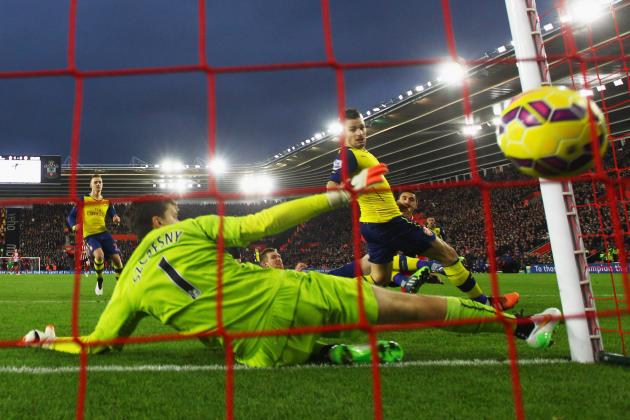 New Year’s day was upon us and with Arsenal being the only team to win both of their games over the Christmas period you could be forgiven for showing a little bit of optimism, it was a chance to finally string three straight wins together and start the New Year on a high. Instead it was more away day blues for Wenger’s men who started well enough but were once more let down by silly individual mistakes which will no doubt be the most repetitive indictment of Wenger’s reign.

A mix up between Laurent Koscielny and Wojciech Szczesny saw Southampton’s Sadio Mane take full advantage and chip the stranded Polish goalkeeper, it was quite an even contest in truth until that point Southampton’s tails were up as they ran through the gears creating chance after chance while Arsenal struggled for a foothold at St Mary’s. This was reminiscent of the trip to Swansea’s Liberty Stadium where Arsenal were not necessarily in charge but were good enough value and a lack of concentration or an individual error just changed the game completely.

If the first goal was bad the defending for the second was abysmal, you would find it difficult to unearth a piece of defending this bad if you traveled around the parks on a Sunday morning. Instead of Mathieu Debuchy clearing his lines he plays a nonchalant back pass to Szczesny who had to stretch, unfortunately for the pole it landed to Dusan Tadic who buried Arsenal with a simple tap in on 56 minutes and that was game over.

Not for the first time this season Alexis Sanchez was asked to play through the middle, for all of the Chilean’s tireless work he just is not a centre forward he was still the only Arsenal player that can hold his head high which has been the story of this season up to this point. Yes there have been injuries and Wenger has been here before, season after season Arsenal have an inconceivably almost endless injury list which undoubtedly includes key first team personnel. Arsenal’s squad is small in comparison to the big three of Chelsea, Manchester City and Manchester United especially in the key areas. This has been the case for sometime and still the same things happen. Olivier Giroud and Danny Welbeck were both unavailable and it is still unclear as to what the real reason was for Lukas Podolski’s absence, was he really injured and has he just had enough of being stuck out in the wilderness.

The most concerning development from yesterday was that Wenger put out his “strongest” back five of Szczesny, Debuchy, Mertesacker, Koscielny and Gibbs all five were found wanting on the day and were second best for the whole 90 minutes not once did they look comfortable. There is a distinct lack of on field leadership at the club, many see Mathieu Flamini as a leader and I have to say that is just wishful thinking. Flamini will bark all day long but when it comes to his own performance he is severely lacking in the quality that is required to play at the highest level.

It is no secret to many where Arsenal need to strengthen and you would hope they move quickly to identify and capture their targets but i’m not sure many of the Arsenal faithful will share that optimism.  At least 2 central defenders and a left back are needed for the back four and then there is a need for at least one world class holding midfield player  possibly another Striker as well but that would not be a priority right now.

One encouraging sign was the return of Theo Walcott, although he only managed a few minutes under his belt it is good to see the speedster back and he has been sorely missed. Walcott’s return couldn’t come at a better time with fellow ex Saint Alex Oxlade-Chamberlain looking burned out and as Wenger would say “he is in the red”. Wenger will also have Mesut Ozil and Serge Gnabry available for selection soon with Aaron Ramsey and Jack Wilshere hopefully not too far behind but the inconceivable truth is that this squad is a million miles away from challenging for a title without a massive squad overhaul and reinvestment. Arsenal are a world class Goalkeeper, 2  top centre backs,a physical holding midfielder and a world class striker away from ever being able to truly compete with the likes of Chelsea, Manchester City and Manchester United.

The Premier League takes a break for the FA Cup this weekend and the visit of Hull City, a replay of better days and the only thing worth shouting about last May when Arsenal lifted the FA Cup. The much over publicised turning point in Wenger’s reign has been nothing more than what it was, lifting a much undervalued trophy for a competition that even the FA don’t really seem bothered about.  Expect a much changed Arsenal side with the likes of Ashley Maitland-Niles, Chupa Akpom and hopefully Gedion Zelalem given a chance along with Walcott and Gnabry who need to regain their match sharpness.

Is This The Final Nail In Podolski’s Coffin?
When Wenger leaves it will take years to rebuild