[Ratings] Another Good Performance to End an Impressive Month 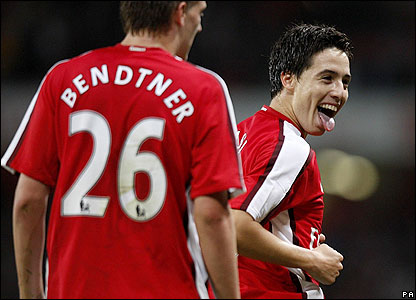 So Arsenal end March with another good win, and another good performance. Elsewhere, Chelsea lost as well as Man Utd, so we have a much bigger chance at 3rd place, and Liverpool have a much bigger chance at the title. Basically, we are in for a very exciting final 2 months to the season! I think that our grip is almost completely secure on 4th spot, and now we can look on to maybe even getting into 3rd, anything above that it a bit 0ver-zealous, however, we can definitely win the FA Cup, and we should get to the semi-finals of the Champions League. So our season won’t be a failure after all, especially with all of our injured players coming back!

So anyways, today was a game o two halves, they dominated the first, and we dominated the second. We took our chances, they didn’t. It was 0-0 at half time, then a pinpoint freekick from Arshavin gave the lead from a sweet header. Minutes later, Diaby and van Persie combined beautifully, and Diaby bulldozered through and finished powerfully. To finish it off, more slick play from van Persie played in Nasri, who finished nicely on the half-volley.