Another Good Performance In the Buildup to Roma 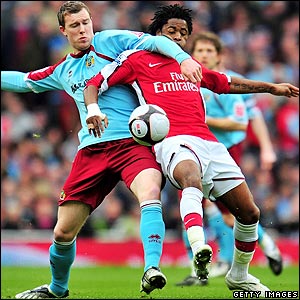 Arsenal have put in yet another good performance to keep up their 100% record in 2009, and have made another big step towards a trophy, while also building up momentum for the Champions League clash vs. Roma. Besides that, we have Eduardo and Walcott now fit.

In our clash versus Burnley we had a rough first 5 minutes but after that we really turned it on and played our style football and we got 3 really great goals out of it, and also showed that we can play class football without our top names. There were no really disappointments in our squad after a great afternoon!

Fabianski: He had a few scares, but when called on he did fine, definitely is more willing to come claim the ball than Almunia. 6.5

Sagna: Great performance from our solid right back. In the first half his crossing was a bit off, but he improved for the second half, and he was up and down the right flank all day long, and combined well with Eboue as well. Brilliant work Bak. 8

Gallas: He was outstanding again, he was everywhere today, and dominated in the air and on the ground. If he keeps it up against Roma we will surely be through. 8

Djourou: Not quite as impressive as his central defensive partner, but still got the job done for the most part. Burst forward well a few times. 6.5

Gibbs: Very composed, very impressive. Man Utd may have Rafael, but we have Gibbs. He had a few great runs forward, and used the ball very well. 7

Arshavin: Again he amazed the Emirates crowd with some brilliant passing, but it is still evident that he lacks fitness. Hopefully in a week he’ll be good after getting a well deserved rest this week. 7.5

Diaby: He kept things ticking in midfield, and showed good strength, but nothing too special. 6.5

Song: Arguably his best performance of the season, man of the match undoubtedly. He was brilliant. He showed passion, determination and good passing. But his defensive ability was what stood out, and he broke up attacks time and time again today. Not to mention he got two brilliant assists. If he gets the call up against Roma he will need another performance like this. 8.5

Eboue: Like his African mate Song, he put in another good performance, and those two showed us why Wenger has so much faith in them. He showed some good dribbling and good passing as well, but most of all a great finish. 7

Vela: WHAT A GOAL! An ice cold finish from the Mexican, he showed us that he is undoubtedly the future answer in the striker position. I dream of the day that he and Wilshere play together like Henry and Berkgamp… 7.5

Eduardo: His first day as captain marked another great goal from Eduardo, an outside of the foot volley!?!?! Amaaaazing! Great goal Dudu, but to be fair he only had a few other good moments, some brilliant flicks, but a quiet game for his standards. 7

van Persie: Had a good effect, and had a goal unfairly disallowed. 7

Walcott: Lacked a bit of sharpness, but should be good for Roma. 7

Ramsey: Didn’t really do much. 6

[Ratings] Alex Song MOTM as Arsenal breezed into the quarter-finals 3-0
[Podcast] The DONKEY Alex Song Has turned into a thoroughbred racehorse! Plus My views on the game