Another Arsenal Win Puts Them back In The Top 3, But It Was Far From Easy 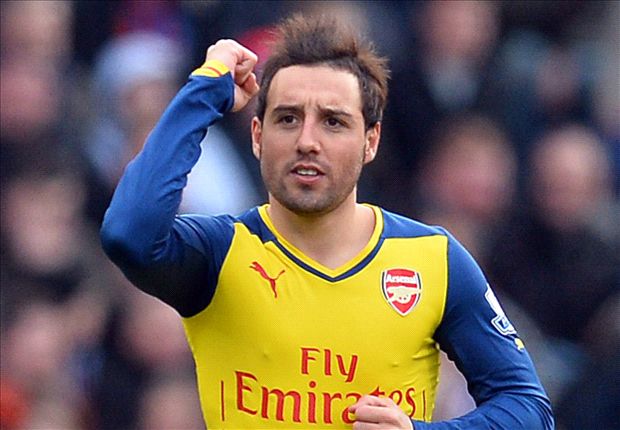 Arsenal continued their pursuit of a top four finish with a hard fought 2-1 win away at Alan Pardew’s Crystal Palace where unfortunately for the FA the officials performances will once more be brought into question.

Palace where charged up for this London derby from the first whistle, however it is Arsenal who were the first to be aggrieved by referee Mark Clattenburg as Mesut Ozil had his goal chalked off for offside. Replays showed the German was in line with defender Damien Delaney.

Pardew’s side kept pushing forward but were as yet to create a clear chance on David Ospina’s goal, Palace looked comfortable but new signing Pape Souare thought he had more time on the ball before Danny Welbeck nicked the ball off him and Souare upended the former Manchester United player who won Arsenal a penalty. Santi Cazorla stepped up and with coolness personified converted past Speroni who was sent the wrong way.

You would have expected this to settle Arsenal and be a set back for the home side but it had the reverse effect, Palace looked more determined to right the wrong of their defensive lapse and were looking to isolate Nacho Monreal at left back who was identified as Arsenal’s weak link. Arsenal had 55% possession after the first 20 minutes but didn’t really manage to convert that into real pressure and Palace looked to have their tails up.

Francis Coquelin was booked for rash challenge on Fraizer Campbell after 28 minutes, the French midfielder had been lucky to escape a booking minutes before and was rightfully booked by Clattenburg.

There were moments of brilliance for the away side as the trio of Mesut Ozil, Santi Cazorla and Alexis Sanchez looked to combine and their experience paid off late on in the first half. Sanchez wriggled free out of midfield picked out Welbeck on the left who got a shot off which Speroni could only parry into the path of Olivier Giroud who finished off things for Arsenal to go 2-0 to the good at the break. It was another goal for Giroud who was looking impressive in front of goal since his return.

Palace came out with a purpose and put Arsenal under pressure from the whistle, they looked like they had learned their lesson from the FA Cup tie a week before where they in effect rolled over to Liverpool’s possession and were comfortably beaten.

Arsenal’s Monreal struggled against Wilfried Zaha all afternoon and was constantly tested by the young Englishman who resembled a man with a point to prove.

Although Arsenal were under pressure they had chances to extend their lead, a hopeful clearance landed at the feet of Ozil who cleverly chipped a ball over Ward, waited for support and played a lovely weighted ball to the on rushing Sanchez who poked on effort inches wide of Speroni’s far post.

Pardew’s men got a breakthrough late on when Arsenal failed to clear their lines and substitute Glenn Murray bundled the ball in from close range, it would be hard to argue that the home side had deserved something out of the game due to their persistence. It could have been better for the home side as Murray saw his header come back off the post with Ospina rooted to his line.

Arsene Wenger’s men managed to hold on to the 3 points and will be glad to get home knowing they put themselves back into the top four and can look ahead to the visit of AS Monaco in the Champions League on Wednesday night.