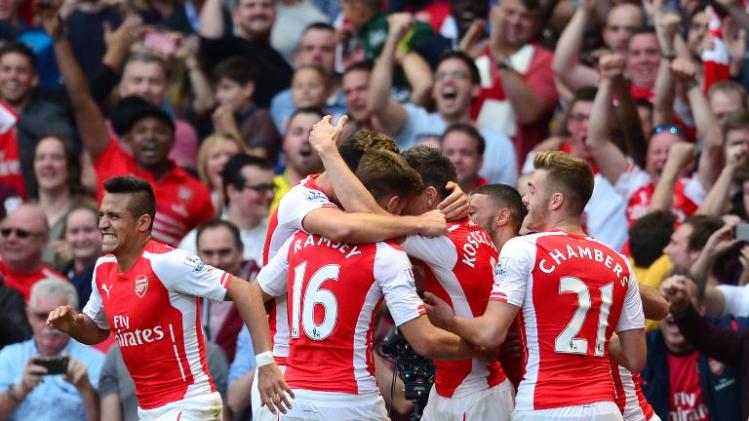 The date was 17th May and Aaron Ramsey has just clawed Arsenal back from the brink of FA Cup final failure in a dramatic turn of events Arsenal lift the FA Cup after trailing 2-0 the underdogs Hull City. This could be a huge turning point in Arsenal’s future, after waiting so long to lift some silverware it has come off the back of a trouble ridden season that had seen a Premier League collapse against the big sides, humiliating losses to the likes of Liverpool, Chelsea and Manchester City.  The 2014/15 campaign was a certainty to be different right?

Sunday’s defeat was a tough pill to swallow for many Gooners as the same mistakes reared their ugly heads, poor defensive co-ordination accompanied by individual errors saw a familiar result. There has been a shift in tactics from last season, it has been a subtle change but definitely a different approach. Wenger has decided to try and go more defensive as was shown from the word go at the weekend he prefers to have more of a Midfield 5 now which is fine in hindsight but without playing the personnel in their most effective positions. Against Chelsea the plan was clear, to try and stifle that Mourinho Midfield. It worked for just over half an hour but once more individual mistakes crept in as Koscielny made a clumsy challenge on the tricky Eden Hazard who confidently converted the penalty he had methodically won. it was a familiar story as Arsenal failed to create much in a big game and were put out of their misery as Diego Costa finished off in style after a relatively quiet game by his standards, Chelsea ran out 2-0 winners.

It is not just the loss to Mourinho that will frustrate the Arsenal faithful it is the inability to address the real problems at the Emirates, every man and his dog knew that in the summer three positions needed serious attention, Defensive backup, Defensive Midfield and Attack. Danny Welbeck was signed from Manchester United on deadline day but with the inexperience of Yaya Sanogo, Lukas Podolski not cutting it and the long term injury to Olivier Giroud options are limited to rotation. The signing of Calum Chambers was a surprise to many but a great one it turns out, with the departure of Thomas Vermaelen not coming as a surprise but what was a surprise was the lack of a replacement. Arsene Wenger was quizzed about Vermaelen when he was still at the club and he was adamant that if he is sold he will be replaced. yet another thing that never materialised. The biggest problem is the lack of cover in front of the back four, it has been a problem for years. It has been a case of papering over the cracks for years now with good attractive football and trying to outscore the opposition, this has been something that has vanished since the departure of Cesc Fabregas to Barcelona back in 2011. It is simply not enough to rely on the ageing Mikel Arteta and Mathieu Flamini that seem to be just capable of doing a job against the smaller sides but when it comes to a top of the table clash they are found wanting time and time again. These mistakes have only highlighted how much needs to change at Arsenal and also how much actually has.

The results have been somewhat uninspiring and underwhelming since opening day against Crystal Palace, a tough game resulted in a close 2-1 victory thanks to a last minute strike from Aaron Ramsey, much more was expected, it was only to go on to be an indication of how tough this season could turn out to be for the Gunners. Next up were Everton at Goodison park which was a terrible experience last season as Wenger’s side were pulled apart in a 3-0 loss, it was imperative that this was avoided and an unbeaten run continued. It was as tense as they come and somehow after being 2-0 down Roberto Martinez’s side threw away a 2 goal lead as Giroud’s header rescued a point. yes it was a good indication of character but not much else. This season has been a case of too many draws, something that resonates with the George Graham era. Draws away at Leicester and home to Manchester City (from winning positions) have asked the question as to whether Arsenal can finish off teams, do they have the adequate firepower or know how? it doesn’t seem like it. On the 20th September it was a trip to Aston Villa which had many fans worried, Paul Lambert’s Aston Villa had just won at Anfield 1-0. It was the Mesut Ozil show as he was finally played in his favoured position just off the front of Danny Welbeck and it was working, it worked so well that Arsenal ran out eventual 3-0 winners. That was the last Premier League victory, this was followed by a drab 1-1 North London derby where Alex Oxlade-Chamberlain rescued a point late on and then the Chelsea loss.

It was an awful weekend for the Arsenal who slipped to 8th place in the Premier League table and it is very hard to defend the performances, they have been ponderous at best. A win at Stamford Bridge would have seen Wenger’s reds back into the top four, instead wins for Manchester United, Manchester City, Tottenham, Swansea, Southampton and West Ham have seen them stuck in mid-table. There is now an International break with the Premier league convening on the 18th October with Hull City visiting the Emirates, after that there are Premier League games away to Sunderland and at home to Burnley. The next three league games are going to be huge for Wenger who will already be feeling the pressure after signing a new contract and with the natives already restless into a new season before it has really begun.

Why Fabregas doesn’t deserve to be booed!
Injury Crisis at Arsenal Worsens: Ozil ruled out for three months