An insight into Arsenal’s preseason opponents 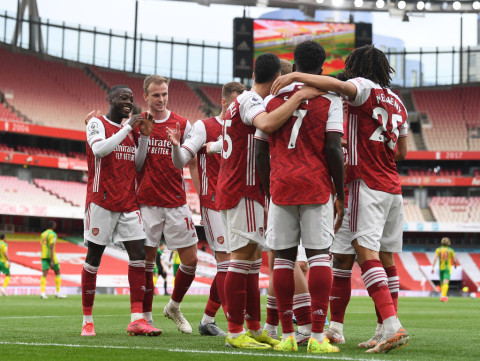 Arsenal’s preseason has probably started by the time this article has been published. The Gunners travel to Scotland to face Hibernian & Rangers before heading off to Florida for the Florida Cup to play Serie A Champions Inter Milan. They will then come back to London in their final stage of preseason to play rivals Chelsea and Spurs.

In this article, I preview all the matches that Arsenal will play and what is expected out of these games before the vital clash with Brentford in the first game of the Premier League campaign.

Hibernian:
The first stop of the Scotland tour sees Arsenal face Hibernian, who finished 14 points behind 2nd placed Celtic. As a result, they have qualified for the new UEFA Conference League qualifiers, a competition that Arsenal did not manage to get a place in.

Arsenal fans are likely to know Josh Doig who was rumoured to come to the Emirates at the start of the summer. The young left-back has since rejoined the squad for preseason and could feature in Tuesday’s game.

Other threats include new signing Jake Doyle-Hayes from St Mirren and Aussie winger Martin Boyle who seems to lead the attack for Hibs.

The first game of preseason has typically gone well for Arsenal, although with rumours that Arteta will hand a lot of academy graduates spots in the starting eleven such as Harry Clarke and Folarin Balogun, who knows what the result may turn out to be.

Rangers:
After a trip to Hibs, Arsenal then faces reigning champions Rangers. Steven Gerrard’s side finally overcame Celtic last season to win the SPFL with an outstanding 102 points.

The right side of Rangers has proved a threat to many sides last season. English duo James Tavernier and Ryan Kent created many goalscoring opportunities whilst Colombian striker Alfredo Moreles is always there to poach the goals. Rangers are a very aggressive side, and despite it being a preseason match it is a good test for Arsenal, who always seem to struggle against physical and strong sides.

However, Arsenal has 4 days to train and prepare for the game and the season ahead so some new faces should appear in the starting lineup on Saturday afternoon including Joe Willock or/and Ainsley Maitland-Niles.

Inter Milan:
It’s then off to the USA where Arsenal partake in the Florida Cup. They jump right into the semi-final where they meet Serie A Champions Inter Milan. The winner of the match is then to play a final between the winner of the other semi-final match in Florida.

Inter Milan had a superb season with former Premier League “flops” having standout seasons. Examples include Romelu Lukaku, Ashley Young and a familiar face in the Chilean winger Alexis Sanchez, who was one of our key players towards the end of Arsene Wenger’s reign. It will be interesting to see how we fare against a side that has been through the rebuilding stages and finally tasted a sense of victory domestically.

Another player to look out for is the Argentine striker Lautaro Martinez. Paired with Lukaku, Martinez is clinical and pacy which is crucial in the modern-day game to get in behind the defence to create goalscoring opportunities. And that is what Lautaro does so well both in the Serie A and the Copa America this summer for champions Argentina.

Chelsea:
Chelsea is an all too familiar opponent for Arsenal who tend to always beat them even when the Blues are doing well, either in a cup final or in the league. However, Chelsea come into the preseason having had an amazing campaign last season with Thomas Tuchel winning the Champions League against Manchester City and with a squad full of players that made the latter stages of competitions internationally such as the Euros and Copa America.

The one player to look out for is Jorginho. Despite conceding a horror own goal to Arsenal last season in the Premier League, he has since gone on to win trophies for club and country with Italy, triumphing against England in the Euros final on Sunday night. It is unknown whether he will return from his holiday yet, but his distribution and set-piece expertise make him arguably one of the best midfielders in the Premier League currently.

Tottenham Hotspur:
This game needs no intro. Yes, you heard it right. An NLD in preseason. As part of a Charity Cup, Arsenal will play both Chelsea and Spurs. Spurs under new manager Nuno Espirito Santos (formerly of Wolves) will likely have a very different lineup and tactics to what Mourinho and then Mason had at the end of the season. The first competitive NLD comes only a month and two weeks later on the 26th of September, so it is important preparation for both London clubs and also gives the fans a bit of entertainment during the preseason.

I’m sure most people know about the dangerous duo of Heung-Min Son & Harry Kane so they’re not my players to watch. Since it is preseason, it’s an opportunity for youngsters to get their chances so I would look out for central midfielder Oliver Skipp, who spent the season on loan at Norwich who were promoted to the Premier League last season. He impressed many fans and hence deserves a chance if Norwich doesn’t make a move to sign him permanently.

So, Arsenal’s preseason won’t be the easiest in the world but will give the fans a good insight into the preparation and planning that needs to take place to compete for the top spots in the Premier League.