Alexis Shines and Ozil Steps Up His Rehab

Alexis Sanchez once again shone in another Arsenal performance where he was the catalyst for another 3 points, Sanchez now has 10 goals in his last 12 games and has hit the ground running this season and is already being lauded as one of the signings of the season.

Sanchez scored twice against Burnley yesterday and was the star of the show and picked up where he left off at Sunderland.

“It was a top performance from Alexis Sanchez,” Wenger told the BBC.

“His quality is exceptional, he takes responsibility and goes at people. He fights, he can score, that is what you want from great players.”

It is very hard to argue with that sentiment, Sanchez has a great enthusiasm for the game and leads from the front. The Chilean forward has settled in very quick and has shown no signs of a World Cup hangover which many feared.

After Arsenal captured the forward from Barcelona for £35 Million in the Summer many expected big things and now Sanchez is delivering. He is a model professional and someone that many of the younger players at the club should be looking to emulate.

“In training he doesn’t even want to do recovery days,” Walcott told Call Collymore, when asked about the former Barcelona man. “That’s how much he loves football.

“All the guys have told him he needs to chill out because, at Christmas when all the fixtures come along, it’s going to catch up with you.

“He doesn’t care, he just wants to play and win. He’s a good leader, and something that we haven’t had in the Arsenal team before. He’s a dream to play with.”

This is stark contrast to the currently injured Mesut Ozil who was roundly criticised for his performances especially his work ethic. In the German playmaker’s absence Sanchez has been the outstanding performer and has looked miles ahead of Ozil who has been struggling with his form.

Ozil who has looked disillusioned at times this season is not expected to feature again until the New Year but has stepped up his recovery. 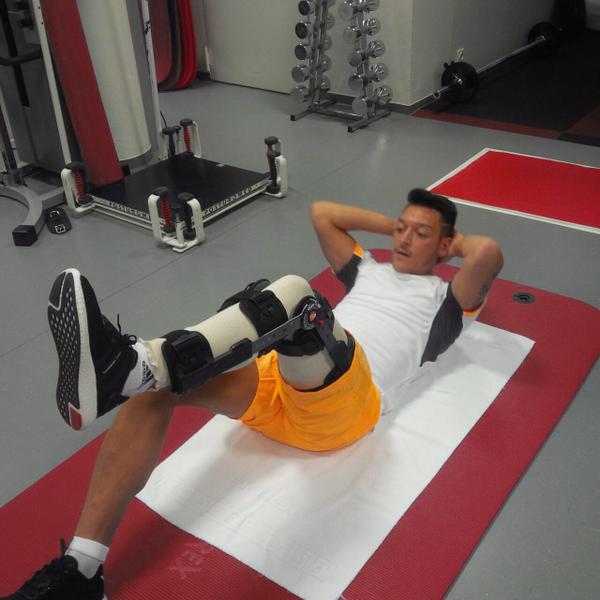 No, this is neither a red carpet nor a magic carpet. it is just the place where I’m working for my comeback,” the German international wrote alongside a picture of him in the gym.

It will be interesting to see who makes way for whom when everyone is fit. In this form Sanchez has to start; he looks at his most deadly cutting in from the left, with the return of Theo Walcott he will slot in to his usual right hand position and take your pick of players that could fill the Ozil void until his return in the new year.