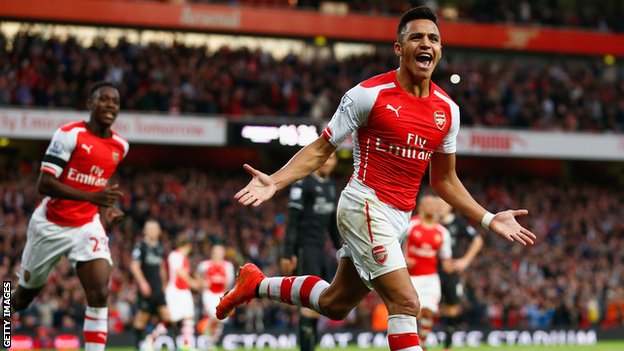 It was build as a foregone conclusion at the Emirates but it was much more than that, Burnley were the visitors as Arsenal looked to follow up with another win after their 2-0 win at Sunderland and keep the pressure on the teams above them.

Arsenal started slow and look edgy, Wenger’s side had not won at home for weeks and had drawn their last 3 home games against Manchester City, Tottenham and Hull City to many a fans disgruntlement. Sean Dyche’s men were propping up the rest of the table and only had 4 draws from 9 games to show for it.

Arsenal were very ponderous in the first 45 minutes and as expected it was the Alexis Sanchez show, you always get a performance of high energy from the Chilean forward and he was looking to set an example to the others around him. He carved out a few chances for himself as you would expect, his best came in the 39th minute when he cut inside Burnley’s Michael Duff from the left and tried to curl an effort around Burnley keeper Tom Heaton but was denied.

It was a very frustrating first half which saw Arsenal have 73% possession, 11 attempts on goal and nothing to show for it, it finished 0-0 at the break.

The Second half started with a familiar pattern to the first, Arsenal probing but not with much intent, Wenger made his typical substitution on the hour mark as Aaron Ramsey replaced Mikel Arteta and the Captain’s armband was passed to Per Mertesacker. Things immediately improved; gone were the two holding midfielders, Flamini was the only one deep as Arsenal pushed Ramsey higher up the pitch which caused Burnley all sorts of problems. Santi Cazorla missed a guilt edged chance as he was denied by Duff’s goal line clearance in the 62nd minute. One thing was noticeable, the introduction of the welsh playmaker was telling, there was a lot more pace to the attacks and more purpose.

Finally the Arsenal faithful could let out that sigh of relief that they had been accustomed to more often than not recently, Calum Chambers put a delightful ball in between the two Burnley centre halves and Sanchez rose the highest to head his 9th goal in his last 12 games. It was well deserved for the former Barcelona forward who was the standout player and has been in recent weeks. Arsenal as good as killed Burnley off in the 71st minute when a goal mouth scramble from a Cazorla corner was duly dispatched by Calum Chambers, a goal and an assist for the 19 year old and not a bad days work for the England international.

Things were looking up and they got better with the introduction of Theo Walcott who was introduced for Alex Oxlade-Chamberlain in the 79th Minute and was accompanied by Lukas Podolski who replaced Danny Welbeck. Walcott and Podolski looked lively and it wasn’t long before they were making a big impact, Podolski especially looked fired up and was denied firstly by Heaton after he blasted a volley from all of 10 yards out and then a couple of minutes late denied by the upright as he once again fired in a volley from just inside the Burnley 18 yard box.

It was time for the man of the moment, Sanchez waltzed through the Burnley defence and confidently converted from close range to make it 3-0 to the home side and 10 in 12 games. A great start to his Arsenal career and has shown why that £35 Million price tag was more than justified.

This was by no means a perfect performance by Wenger’s men who at times looked very uncomfortable defensively and were void of ideas for most part. It is important that they keep on the coat tails of Chelsea who are 9 points ahead, this win puts Arsenal in the top four and they now need to use this as a catalyst to push on and carve out a long unbeaten run.

For Burnley they put up a spirited display but were undone by a few moments of magic from the mercurial Sanchez who has started to show his worth when it was needed most, these aren’t the games that will cost Burnley their place in the Premier League, as long as they show that kind of desire they did today for the first hour they may have what it takes to survive.