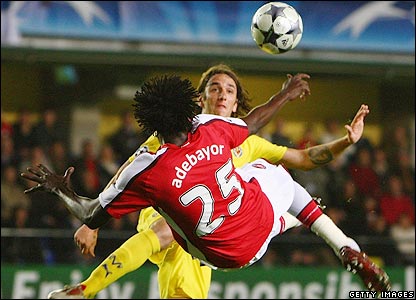 90 minutes completed out of (at least) 180 and we hold a slight advantage going back to the Emirates.  The first half was an action packed one but one in which Villarreal had us on the ropes for much of the half. The action got going almost immediately when in the 3rd minute Manuel Almunia raced out of his area after a 50/50 ball and collided with Giuseppe Rossi. He was hurt on the play but chose to keep playing.  Just a minute later a corner by Joan Capdevila caught the Arsenal defence, and the Villarreal attackers, unawares and it was down to Almunia and Gael Clichy to stop the ball on the line.

The first moment of significance came in the match in the 10th minute when Giuseppe Rossi who was given way too much space to exploit by Alex Song found Marcos Senna in acres of space with a pass and the Brazilian born Spanish international fired home from 25 yards out to give the Yellow Submarine a precious early lead in the game. The game resumed and 4 minutes later Almunia began holding his ankle and it was very clear he could not continue. He was subbed for his Polish understudy Lukasz (pronounced Wookash) Fabianski and at that moment I started wondering not whether we’d concede a second goal but how soon we would. Thankfully we didn’t though and we made it to the half only 1 goal down. He had his fair share of tests though as in the 29th minute Marcos Senna had another go at goal from a similar spot to where he scored from but Fabianski was equal to it and made a good save.  More bad luck fell Arsenal’s way as in the 38th minute Alex Song brought down Rossi on the edge of the area and William Gallas was in the way to accidentally break Rossi’s fall. He was in a lot of pain and had to be stretchered off to receive treatement. He returned to the pitch and would spend only 4 minutes before realising he couldn’t continue with the injury and was substituted for Johan Djourou in the 42nd minute.

Half time didn’t come without Fabregas receiving a caution though. The referee had blown for a free kick just outside the Villarreal box and Fabregas showed shades of former skipper Thierry Henry in trying to take a quick free kick and he while he found the back of the net he also ticked off the referee who booked him for taking the kick before he allowed him to. Hopefully he doesn’t do anything cautionable in the next leg to have him miss the semi finals should we make it through to play either Manchester United or Porto.

The second half resumed and Arsenal looked livelier in this half and spending the first 25 minutes of the 2nd half camped out around the Villarreal area Arsenal finally pulled level after Fabregas chipped a long pass into the area finding Emmanuel Adebayor, just like he did at the weekend against Manchester City, and the Togolese striker controlled it cleanly with his chest and fired a bicycle kick low into the far corner beating Diego Lopez in goal. I’ve slagged him off a fair bit for a lack of effort this season but based on his last 2 games I can’t criticise his performances. Hopefully he keeps it up.

One of the reasons I was really looking forward to this game was to see my favourite player to have worn an Arsenal kit face off with his old club. Robert Pires made his way unto the pitch as substitute for Joseba Llorente (whose name sounds like a really tasty drink I might add) in the 70th minute. Pires, while not being the same speedy player we came to know and love in his days at Highbury, came on and made an impact as he made some great passes around the Arsenal half and one of those passes Marcos Senna who played a cheeky ball through the Arsenal defence for Matias Fernandez, who couldn’t pick out a teammate with his cutback the ball was cleared out of the area by the Arsenal defenders. This just 8 minutes before full time.

The match came to an end and while I had wanted and predicted a win for us we came away with a draw but it’s not the worst result in the world, especially when you take into consideration Manchester United drawing 2-2 at home to Porto. The 1-1 draw means we hold a precious away goal at the moment and Villarreal will definitely have to score if they have any intensions of playing in the semi finals. Our defence has only conceded 8 goals since the start of the year and this should mean Villarreal should find some difficulty getting us to concede at home in the 2nd leg.

We came away with the away goal but also with two injuries. Following the game Arsene Wenger confirmed that Gallas had picked up a medial ligament injury.

“Gallas has a medial ligament injury,”….

“The initial diagnosis doesn’t appear to be very positive, but it will be clearer on Wednesday.”

First thoughts on this is that it might mean the end of the season for Gallas but as we’ve seen with both Theo Walcott recently and Cesc Fabregas earlier this season, sometimes it’s best to wait until a full medical report has been given before we hit the panic button about player absences.

“As for Almunia it is the second time he has twisted his right ankle, and generally that means a three-week lay-off”

This is what concerns me most. The first thing I think of is our next five fixtures. In our next 5 fixtures we’re away to Wigan, at home to Villarreal, Chelsea at Wembley, away to Liverpool, at home to Middlesbrough. All these matches are against opponents who have given us difficulty defensively in our last encounters with them. If Almunia’s out for all these games will Fabianski be able to consistently provide the goods needed defensively for us to continue to challenge for both cups for the rest of the season? What does this mean for our backline with Gallas out. Will Wenger now play Djourou alongside Toure or will Silvestre come in at the back to partner the Ivorian for the more significant of those 5 games. Will Wenger opt for experience over fresh young legs? I guess we’ll just have to wait for these games to pass to see what unfolds. It makes for a very interesting month of April now though.

Before I go here’s my player ratings for the game:

Almunia – N/A Didn’t spend enough time on the pitch but conceded a goal he couldn’t do much about.

Sagna 6 Needs to work on his crossing.

Toure 8 Saw a lot of action from the Villarreal attackers and coped well.

Gallas 7 Was decent until the injury.

Clichy 6 Pretty inconsistent game. Had some good moments but also some shaky ones.

Walcott 6 Was very mobile but his crosses were ineffectual.

Song 5 At fault for the goal as he backed off Rossi and gave him too much room to find Senna. Had a clumsy game which also costed us one of our better defenders.

Denilson 7 Didn’t do much in the first half but was quite involved in our attack in the second half with some good passes played forward.

Fabregas 7 Good passing from the Arsenal skipper throughout the game. Great ball to provide the assist for Adebayor.

Nasri 6 Was here and there but could’ve done better with the chances he had in front of goal.

Adebayor 8 Led the Arsenal attack with great mobility and didn’t look his usual bored, lazy self. Scored an amazing goal. Hopefully it’s just a taste of what’s to come.

Fabianski 8 Brave performance and did well when called upon.

Djourou 6 Looked shaky moments after coming on but didn’t make any crucial mistakes.

Eboue 6 Never made enough of an impact on the game but wasn’t bad either.

For more reaction on yesterday’s game be sure to visit our forums at www.arsenalaction.com

Well that’s all from me for now. Until next time, take care!

Villarreal vs. Arsenal: Champions League Quarterfinal Preview
A Not So Good Friday For Arsenal