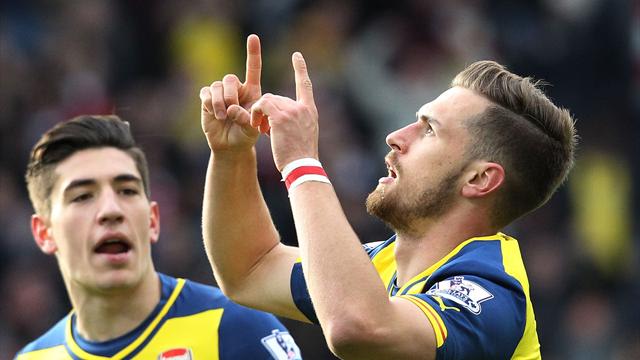 Aaron Ramsey guided Arsenal to their eighth consecutive win in the Premier League with a hard fought 1-0 win at Turf Moor a place that rivals Manchester City and Tottenham have dropped points at in recent weeks. It took just 12 minutes for Arsenal to break the deadlock, Francis Coquelin intercepted a pass from Burnley defender Jason Shackell then drilled a pass into Alexis Sanchez who found his shot blocked which was followed by Burnley keeper Tom Heaton denying Mesut Ozil, another blocked Sanchez effort found it’s way to Ramsey who fired home from 10 yards.

It was yet another sign that the mentality of the squad has shifted and they have developed a professionalism in the away games, this is the type of game that Arsenal would have failed in last season or even earlier this campaign. The away game at Manchester City was a key moment for Arsene Wenger and this squad, the normal approach would have been to attack and in the past this has been unfruitful and almost a suicidal tactic. Things have progressed with the squad learning all the time and are now very astute at managing a game without letting it just drift by, Arsenal were always in control yesterday and the 3 points see them move just 4 points behind league leaders Chelsea who have 2 games in hand including a tough trip to Loftus Road today at 1.30 pm.

Much has been made of the form of Francis Coquelin, Mesut Ozil, Alexis Sanchez and Olivier Giroud but one man that appears to have escaped much praise is Aaron Ramsey who has returned to form couldn’t be better timed. The former Wales captain has got on with his business quietly but effectively this season. Yesterday saw Ramsey score his fifth goal of the season which is a week on from grabbing 2 assists in the 4-1 demolishing of Liverpool.

Ramsey has been playing in a right side position that appears to be working for the welsh midfielder who has 5 assists including 2 assists and a goal in his last 2 Premier League games, he has been an unsung hero in the last 10 games much like Ozil the majority of his good work goes unnoticed with him creating 37 chances in 23 games, completing a total of 1044 passes with an accuracy of 85% and 74% of those being forward passes he is a midfielder that is always looking to get on the front foot.

Arsenal go into another important fortnight with the FA Cup Semi final against Reading followed by the visit of Chelsea to the Emirates and the form and fitness of Ramsey could be key to winning silverware this season.