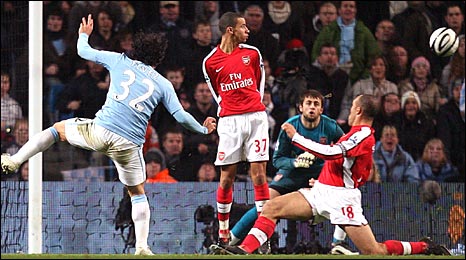 I know what some of you are going to say “its only the Carling cup” Well tell that to the 5000 gooners who traveled to Manchester tonight.

1 ) Wenger was wrong not to replace Adebayor in the summer, But we have made a massive profit so he is loving it.
2) Without RVP Arsenal lack a cutting edge in front of goal. Eduardo cant play up top on his own and can only play in a 4-4-2.
3 ) We have a team of midgets. But we have known this for 3 season. Whats taking wenger so long in addressing this issue?
4 ) This new 4-3-3 system is gash. Wenger told us this will make us more defensively stronger
5) Wenger now has to go out and spend big. 4 players are needed. A GK,CB,CM and a proper striker and not a elf.

In Wenger we trust? I think some of you need to wake up and smell the coffee.

[Rating] Surprise Surprise, Drogba does it again. Arsenal pathetic
Wenger is NOT god!!! In Arsene We Trust? Give me a break